Say what you will about Nick Cannon, the man is known for making BOSS moves.  Most people believe that he was just out here wildin’ out, but he’s a multi-media mogul. When you look closer at the deals he’s been a part of; you will see the numerous credits he has under his belt.  He is an executive producer, writer, actor, musician, etc. He’s more than a talent who chases the bag; he hands them out.

The Drumline star (yes, I said Drumline Star, that’s one my favourite movies) recently got himself in some trouble with remarks that he made on an episode of his podcast, “Cannon’s Class.” The passionate conversation, with Professor Griff, yielded what some believed included anti-Semitic conspiracy theories as they discussed how Black people were the “true Hebrews.”

ViacomCBS, the parent company of BET, MTV, and other networks, to name a few, were quick to respond and distance themselves from Nick.  He drafted a scathing response and published it on his social media channels. You can read the full account here. In short, Nick did not let them off the hook.

Today, I want to focus on a quote from Nick’s response. He said, “But like the great Shirley Chisholm, I am unbossed and unbought and unbothered.” This statement, a take on the 1972 slogan of Shirley Chisholm’s historical presidential campaign, should be the mantra of every Black woman in business.

Shirly Chisholm embodies all the qualities that Black women in business should personify. She was an agent of change and shook the political landscape of her time. Not only was Shirley the first woman elected to Congress in 1968, but she was also the first woman and Black person to run for President. From the day she set foot in Congress, she challenged the status quo. Chisholm fought for reassignment when she was placed on a committee that she didn’t want any parts of. She was the leading force behind creating the Congressional Black Caucus and forever changed the face of American politics. Both women and Black people would never have to say they were the first to run for President because she dared to take that stand.

The phrase “Unbought & Unbossed” is so powerful! Let’s shift the focus and identify how this applies to entrepreneurship.

Unbought “un-bawt′, adj. not bought or sold, obtained without buying: not bribed”

What principals do you stand on as an entrepreneur?  Let’s play with words.  While I am willing to sell my products and services and maybe even the entire business, I cannot be bought.  Alright double English majors, don’t come for me in the comments. Words have technical meanings, but when you think about the context of what it means when someone says “they bought you” it is not a positive statement.  If you can be bought, you are compromised and don’t have the upper hand. That is not the position that you want to be in, and there are actions you can take to prevent this from happening.

If you don’t want to find yourself in this position, first and foremost, start by owning a piece of the pie.  This will ensure you have a seat at the table, and if it’s your business you decide who gets an invite to it.  Remember, ownership is not just about owning the inventory and listing your name on the LLC.  You want to make sure that you own all intellectual properties, the domain name, trademarks, patents, and copyrights.

A sign, which many of us ignore that indicates you can be bought, is how you’re willing to do anything or take on any ol’ kind of client.  I respect the hustle but know your worth and understand your value. The keyword here is VALUE.  When the value is there, you don’t have to continually discount your prices and work around the clock for every dollar.

Unbossed “Not under the influence of a boss, leader, or manager”

“You are not the boss of me!” This applies to that particular supervisor at the 9-5, significant others, friends, family, clients… keep the list going.  However, the declaration means nothing unless you can back it up.

If you work a day job and don’t want to, then create an exit plan.  If your friends and family think they are in charge of your life, then establish healthy boundaries (see blog post).  If you want to be the boss, you must act like the boss, set expectations like a boss, hold people accountable like a boss, and THINK like a boss.

No shade, BUT if you are growing a business through an MLM (Multi-Level Marketing), or other company that you don’t own, with affiliate sales, then understand that these opportunities are a great way to make money.  Here’s the issue – you are not the boss of these businesses!  You have no control over changes in the quality of service or branding of the products.  You could also fall victim to any situation which may negatively affect the parent company’s reputation and even force their closure.

If you let everything get to you, you might as well close up shop today.  Customers, competitors, the news, COVID19, county regulators, and just about anything else will attempt to get on your last nerve.  Someone will always be in your business; think they know better or will let you down. You cannot allow any of these circumstances to take your eye off the prize.

Its time to make Shirly Chisholm proud, so live the slogan, be Unbought and Unbossed! 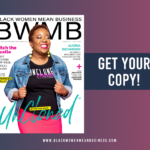 BWMB is dedicated to the enrichment of Black Women and is defining what it means to be a Black Women in business today and tomorrow. Women turn to us when their heads are filled with great ideas and they are ready to create a competitive edge and grow a thriving business.

SHUT DOWN DUE TO COVID-19. Six months ago, that was a prominent announcement found on doors, in…
END_OF_DOCUMENT_TOKEN_TO_BE_REPLACED
Share
Business

Dealing With Unsupportive Friends When Running A Business

With a fed-up culture of Black people being mistreated, overlooked, and suppressed, communities are…
END_OF_DOCUMENT_TOKEN_TO_BE_REPLACED
Share