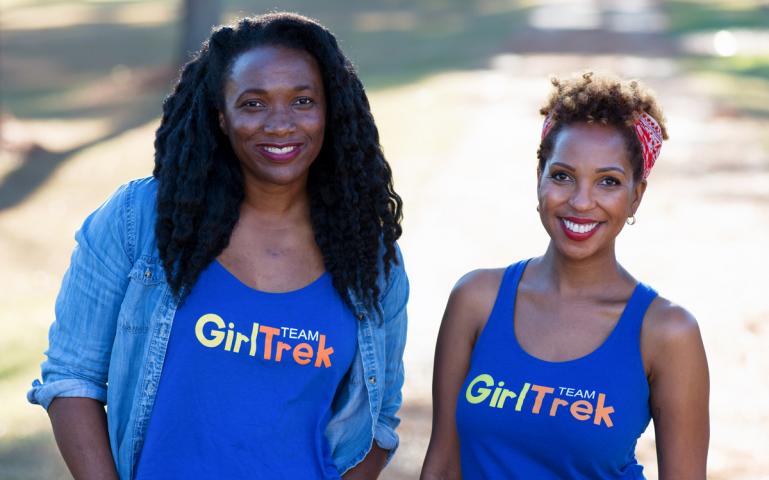 GirlTrek is Redefining Self-Care One Million Steps at a Time

“Why are black women dying faster and at higher rates than any other group of people in America?” ; a momentous question posed at the beginning of a 2017 Ted Talk hosted by GirlTrek founders Morgan Dixon and Vanessa Garrison.

The answer, though not definitive, points directly to the often obliterated act of “self-care”; or simply put, caring for one’s self.

A practice that was once an anomaly for most, has quickly begun to make its way to the forefront of modern-day health and wellness. But for Black women, the act of caring for self is often overshadowed by an interminable to-do list of caring for others. From raising children, tending households, and running businesses; the black woman is often praised for putting the needs of others before her own. A sacrifice often rewarded with overworked bodies, restless minds, broken spirits, and unfulfilled dreams.

Unfortunately, this public health crisis is often outweighed by an inaccurate perception of the highly cliched “strong black woman” imagery.

“One hundred and thirty-seven black women die everyday from heart disease”, explained Vanessa. “We die higher and faster than any other group in the country. We are suffering a decreased quality of life that has taken us away from our friends and family and yet we don’t talk about it like a crisis.”

Fortunately, GirlTrek’s mission to resolve this crisis has blossomed into a decade-long sisterhood of over 1 Million women walking toward a lifestyle of health and healing.

“It was really a movement that was meant to inspire our own friends and family to then inspire their friends and family to reclaim 30 minutes a day for self-care”, Vanessa adds. ”To use walking as a practice that would put us in community with other people so that we can start to solve bigger problems together. And that we could honor the legacy of our ancestors and learn from them in the beginning.”

And in true ancestral fashion, the ladies of Girltrek have not only been at the forefront of several social injustice movements, but their presence has been a necessary additive to the plight of black women everywhere. Every Saturday hundreds of women gather in sisterhood, dressed in their superhero blue, to walk together in the name of health, healing, and change.

Black Women Mean Business spoke with the ladies of GirlTrek to learn about their mission to heal Black women and the importance of self-care in today’s society.

What is it about black women walking that is historically significant to your mission?

Morgan: Outside of the context of history, it’s significant for Black women to slow down. So walking is a meditation to heal our spirits and our minds; and not to be running in the rat race of validation.

Walking is literally the single most important thing you can do for your health. If walking were like a miracle pill, it would solve for all the preventable diseases and decrease your risks by nearly 50%. So it also is just a really powerful intervention for health.

Vanessa: Historically, from Harriett Tubman to the women in the Montgomery Bus Boycotts, when black women walk, things change; and we just know that to be true. Walking and talking rhythmically for justice in nature is just such an efficient way to change the world. You can talk about solutions, you can audit the needs of your neighborhood, you can pray, and it’s such an efficient way to heal. So that’s what we do.

After seeing Girltrek blossom into what it is today versus when you initially started, how do you feel knowing that you all are responsible for rallying so many women together to push forward this change in health and healing?

V: People questioned us. People who were supposed to be on our side. It was like, “when has one million black women ever done anything together?” I feel justified that not only do we do a lot of things together every single day, but that we are demonstrating this level of solidarity that is novel. All we needed was to invest time, resources, ideas, energy, and prayers into making it come alive. And that feels great every single day. It feels great to be a part of GirlTrek.

As Black women running a foundation that’s based on “self-care”, what does self-care mean to you personally?

M: In the context of global injustice against black bodies and particularly black women and girls, self-care survival. It’s living and not dying.

So self care is really a seditious word to describe every action a woman takes to live and not die.

V: Self-care for me lately, has been speaking the truth to myself and auditing my own energy; being honest with my own emotions, giving them space to show up, [and] reflecting on where I’m the problem in my own life. It’s an internal dialogue and conversation with myself. But it really starts with a divine conversation between me and my God around who I am. That’s the kind of self-care space that I’m in right now, just to tell the truth to people and myself and to ask other women to do the same.

As the foundation of the Black family, Black women are often praised for putting the needs of others before their own. With the act of self-care becoming so popular, why do you think it’s so important for women to start taking back their power?

M: That actually for me is the issue and that’s where GirlTrek comes in. Service over Self is the mantra of Black women everywhere. It’s what we are taught, it’s what we are culturalized around, it’s what we are celebrated for. And that service in today’s era of Black Lives Matter means showing up on the front lines to say our lives matter too. And what GirlTrek is saying to black women, in fact are, we matter.

That we’re worth putting our own issues of our lives at the top and that [we] can be in service of each other and of our own shared goals and vision. And we can pull our resources. Just as we organize around gun violence, the environment, and economic injustice; we can organize around the joy and healing of Black women. We can use the exact same strategies that they use in the Civil Rights Movement and we deserve to use those strategies to build up a foundation that supports Black women’s joy of life, living, and families.

V: The truth is that we’re in a day by day fight for our lives. And every day is a day to just give yourself grace; to wake up and believe yourself to be worthy.

What does being a black woman mean to you?

M: We’re the most valued and yet the most discarded in the world. Like our ideas, our culture, our beauty, our strength, our resources; it’s what’s most used and needed. Everything in the world is powered by Black women right now and yet they’re trying to constantly put us to the side as they do it. But yet it feels very irrelevant because right now it feels like the time is now for black people, not just black women, where we can design our own world in life. So to me to describe Black women right now would be like a time of opportunity; a time of inheritance.

I believe that black women are primed and ready for a new tomorrow. And I think that it feels like a very beautiful Renaissance to me. But I think we’re going to have to stop seeking validation and build together in a different way.

V: For me, black women are highly and deeply evolved; as a species, as a race, as a sex. And that makes us actually incredibly futuristic. We are the blueprint for the future.

On the MOVE with Deja Riley

Deja Riley is a motivational force to be reckoned with. Never one to depend on nepotism, Riley, a…
END_OF_DOCUMENT_TOKEN_TO_BE_REPLACED
Share
Lifestyle + WellnessUncategorized

Word of the Year!

For some, anew year represents a new slate. For most, it’s a time to set goals and align…
END_OF_DOCUMENT_TOKEN_TO_BE_REPLACED
Share