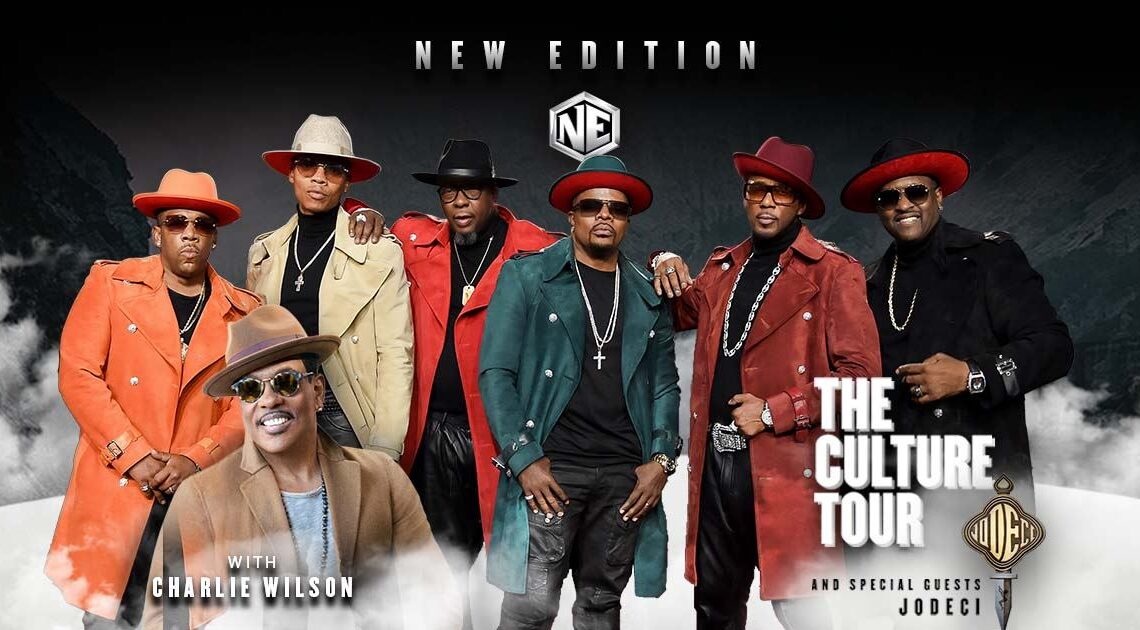 New Edition’s sold out The Culture Tour rolled into my hometown, Las Vegas’ Michelob Ultra Arena, a couple of weeks ago, and – per usual – the only “Boy” band that matters, along with Jodeci and Uncle Charlie, did not disappoint.

Up first, the original Bad Boys of R&B; a super polished sounding, Jodeci – siblings DeVanté Swing & Mr. Dalvin and K-Ci & JoJo – wowed the concertgoers with all of their biggest hits to date; “Come and Talk to Me,” “Forever My Lady” “Stay” and “Love U 4 Life”; a sure shot crowd favorite.

DJ Kool, known for his contribution to “Let Me Clear My Throat” fame, then took to the stage manning the-ones-and-twos readying the hyped-up audience for “my uncle, your uncle, everybody’s uncle,” Mr. Charlie Wilson. Ladies, when I tell you, I sang until my voice was gone. Yes, I was off-key, but Uncle Charlie knows my heart.

Opening up with The Gap Band’s raucous “Party Train,” Wilson breezed through all those early group classics; “Burn Rubber on Me,” and “Early in the Morning,” before delving into his vast solo discography “There Goes My Baby” “You Are” and his signature “Charlie, Last Name Wilson,” before closing out his set with the perfect show ender; “Outstanding” and an acapella rendition of Ye’s “Bound 2.” Uncle Charlie even tackled Pharrell’s “Beautiful” and Zapp’s “Computer Love.”

The moment that everyone had been waiting for finally arrived as Ronnie (DeVoe), Bobby (Brown), Ricky (Bell), Michael (Bivins), Ralph (Tresvant), and Johnny (Gill), too, entered the arena to thunderous applause. The legendary sextet kicked things off with their 1983 debut “Candy Girl,” taken from their album of the same name, followed in succession by “Mr. Telephone Man,” and the often choreography mimicked “If It Isn’t Love.” You already know, dancing and off-key singing followed.

The King of R&B, the Brown Bomber, stepped out with his ’88 chart-topper “Roni,” leading into Johnny’s red dress dropper “My My My,” before BBD slid into their “Hip Hop Smoothed Out on the R&B Tip with a Pop Feel Appeal” “Do Me!.” JG returned with “Fairweather Friend,” and then it was group time again as NE launched into another string of nostalgic sing-along jams; “You’re Not My Kind of Girl,” “Hit Me Off,” “N.E. Heart Break,” “Jealous Girl,” “Is This the End,” “Cool It Now,” “My Secret (Didja Get It Yet?)” and “Count Me Out.”

Bobby’s “Every Little Step,” a mash-up of “Love TKO” with “Boys to Men,” covers of Keith Sweat’s “Make It Last Forever” and “Sweet Thing” by Rufus & Chaka Khan followed suit. The Stone Cold Gentleman himself, Mr. Ralph Tresvant, crooned his way through a heartfelt “Sensitivity,” Ricky Bell proved why he’s still the industry’s “Best Kept Secret” with “When Will I See You Smile Again?” “Rock Wit’cha,” another Bobby Brown staple, the timeless hard-hitting “Poison” courtesy of Bell Biv Devoe, “My Prerogative,” and Gill’s “Rub You the Right Way” rounded out the hits parade. In the end, Beantown’s finest closed the evening with a beautifully executed – and couldn’t be more appropriate considering New Edition’s tumultuous years – “Can You Stand the Rain,” the third single from their fifth studio collection, 1988’s Heart Break [MCA Records].

The energy was both unwavering and infectious from start to finish, as the music selections hearkened back to a specific space and time when and where NE literally became the soundtrack to most of our – the masses – lives. Thank you, Black Promoters Collective.

Word on the street is that they are coming to Las Vegas… Be on the lookout because you already know, I will be front and center. You can also catch them at the Essence Music Festival.

Word of the Year!

For some, anew year represents a new slate. For most, it’s a time to set goals and align…
END_OF_DOCUMENT_TOKEN_TO_BE_REPLACED
Share